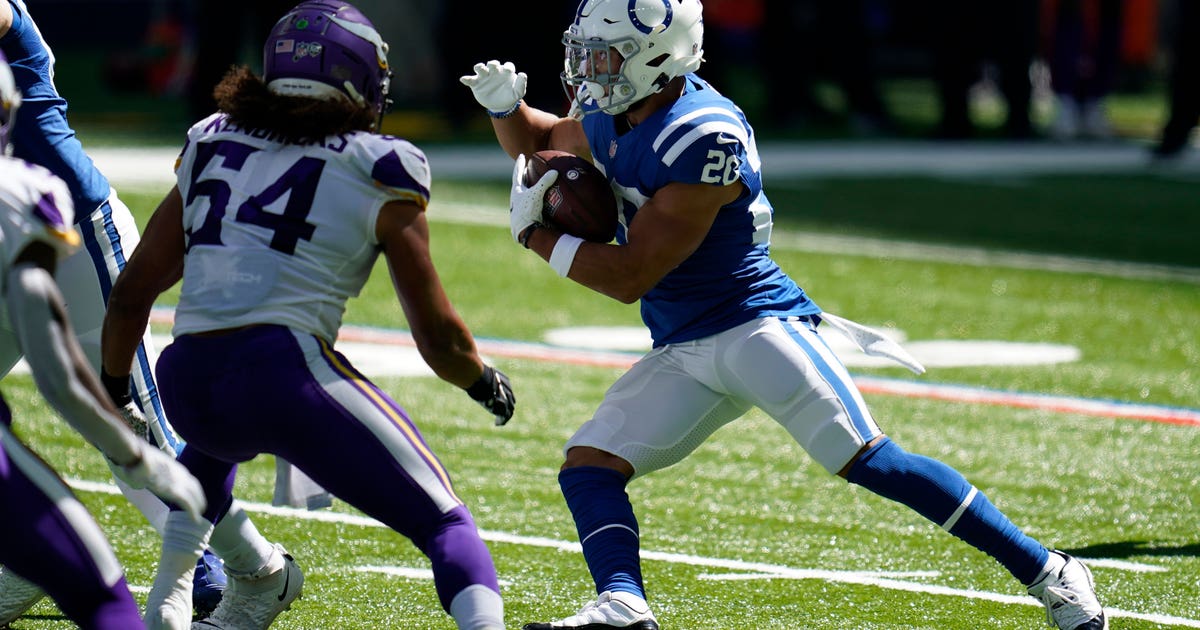 “There’s no question that this is a blueprint to what we want to look like,” Reich said after Indy’s 28-11 victory over Minnesota. “Defensively, we played such a good game on defense. I can’t say enough about how they played. On offense, we wanted to re-establish the run.”

Jonathan Taylor became the first Colts rookie to top the 100-yard mark since 2012, scored his first career touchdown on a nifty 5-yard run to give Indy an early 7-3 lead, and proved he can be the NFL workhorse he was at Wisconsin.

The 21-year-old running back carried the ball 26 times and caught two passes Sunday, and lost yardage on only three plays for a total of 4 yards. Two games into his pro career, Taylor has accumulated 199 total yards despite no minicamps, no offseason team activities and no preseason.

Even Philip Rivers enjoyed handing the ball off.

“I’ve always felt like the term game manager is seen as a negative. I don’t think it’s a negative,” he said after his first win with Indy. “If that’s the term ‘game manager,’ and that’s what today was, it was a heck of a lot of fun.”

The defense did its part, too.

Indy allowed 175 yards Sunday, the fewest in six years, and Cousins’ rating of 15.9 was the lowest by an opposing quarterback against Indy since October 2005.

“We stopped the run. We had turnovers. We made the statement we wanted to make defensively,” Reich said. “The players just came, and they played with discipline. They played aggressive. We did everything on defense as a unit that you need to do to stop an explosive run game.”

Short passing game. While Rivers hasn’t put up huge numbers in his first two games with the Colts, he has been accurate and comfortable getting the ball out quickly to the running backs and tight ends.

Red zone offense. For the second straight week, the Colts nearly doubled an opponent’s total yardage and this time they scored enough points to pull away. But Indy must do better than converting four of nine red zone possessions into TDs.

T.Y. Hilton was angry about dropping two passes at the end of the Colts’ loss in Jacksonville. Then came another drop, in the end zone, on Sunday. Hilton caught three passes for 28 yards against Minnesota and now has seven catches for 81 yards this season.

Starting safety Malik Hooker became the second Indy player in two weeks to suffer a season-ending Achilles tendon injury. Both he and running back Marlon Mack, injured last week at Jacksonville, were in the final year of their contracts. Hooker left the game early in the second quarter.

Receiver Parris Campbell received slightly better news after hurting his left knee on Indy’s second play against the Vikings. He will be out indefinitely, though he did not tear his ACL, and coach Frank Reich said Campbell may not need surgery.

Cornerback Rock Ya-Sin was released from a local hospital after missing Sunday’s game with a stomach illness. Reich provided no additional details about Ya-Sin’s status.

40 and 25. Reich acknowledged he didn’t call enough running plays at Jacksonville. The fix: calling 40 runs and 25 passes against Minnesota, which allowed the Colts to control the game and eventually put it away.

Against Minnesota, the Colts showed they can be successful with this style of play. Now they must show they can play that way consistently. Next week’s game against the New York Jets (0-2) gives them that opportunity.

Marcellus Wiley: ‘Dak is a genius’ for betting on himself after Week 1 loss